Presentation of the Flag of the U.S.A. by Veterans of the Foreign Wars, Post #2967 – Wilmington, California – POLA 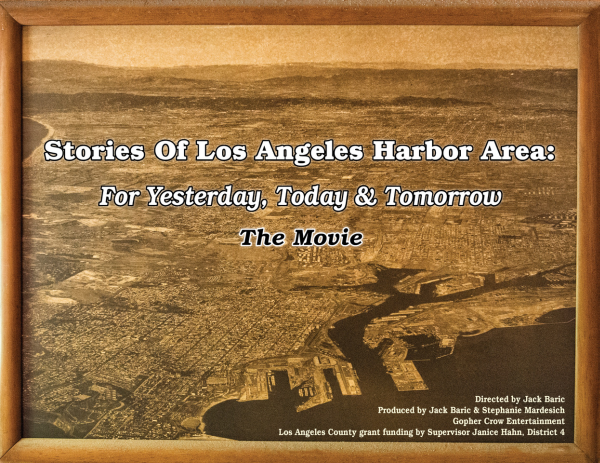 The Stories Of The Los Angeles Harbor Area: For Yesterday, Today & Tomorrow (SOLAHA) oral history project, filmed in 2018, aims to preserve the significant history of the people and communities of the Los Angeles harbor area, that spans from the port towns of San Pedro and Wilmington, to include Lomita, Harbor City and the Palos Verdes Peninsula, recognizing what is inherent to inspire future generations to continue striving to make it a great place to live, work, and invest in as the area continues to progress. Volume I included 20 individuals resulting in 72 stories. Segments have been released weekly via internet since October 2018 and can be viewed at the website at www.storieslaharborarea.com

Stories Of The Los Angeles Harbor Area: For Yesterday, Today & Tomorrow – The Movie is a composite including one representative story from each participant to demonstrate and instill the importance of retaining memories of the past for the present and future. Volume I is the first ever oral history project under the auspices of Los Angeles County made possible through grant funding by Supervisor Janice Hahn, District 4. Plans are underway for Volume II to be recorded in 2019. 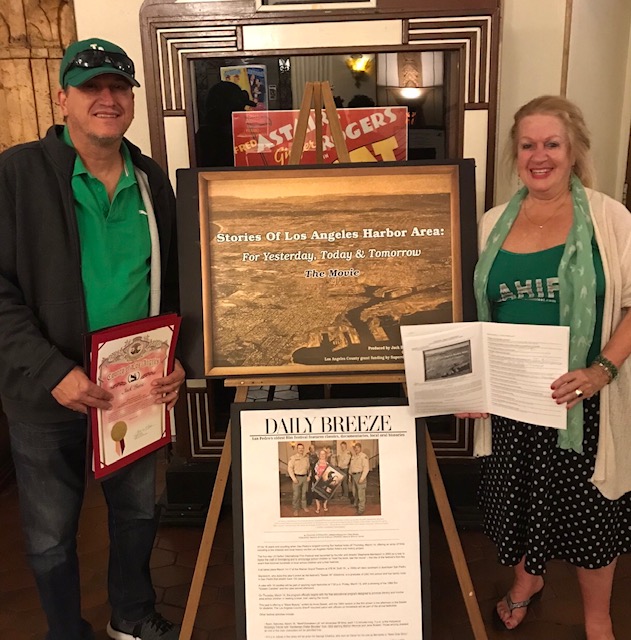 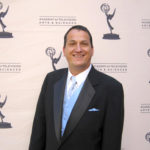 Emmy Award winning filmmaker is a partner in Gopher Crow Entertainment, a production and marketing company. Baric, the founder of San Pedro Magazine (now San Pedro Today) , has a diverse professional background with a foundation in great storytelling.

He has produced numerous documentary films that have played on various networks, including PBS, Fox Sports, Amazon, and Hulu. He has also made hundreds of short form videos for local and internationally based clients. In addition to film and print publishing, Baric has a passion for marketing, economic development, and charitable good works.

Known for her eclectic interests, as a community activist and strong presence, and avid about historic preservation with professional background in public relations/journalism, “SM” is an alumna of the University of Southern California School of Cinematic Arts with extensive knowledge of film history and production an a public access producer.

She had the oral history project in mind for many years and finally took the idea to Jack Baric proposing they collaborate. After their initial meeting in May 2017 SOLAHA was in production a year later in 2018, and the movie version in 2019.

Owner of San Pedro Fish Market tells the story of his family emigrating from the Italian island of Ischia to  New York and ultimately arriving in San Pedro.

Former ILWU International president, (late) Dave Arian talks about butting heads with his dad over an ILWU contract that Harry Bridges negotiated, only to later realize that he was wrong and Harry was right.

LA City Councilman Joe Buscaino recalls Italian longevity and  memories from his childhood of playing on his Uncle Giuseppe’s fishing nets and  his “Nona” (grandmother)  preparing  pasta with snails  in red sauce for a favorite family meal.

Olivia Cueva-Fernandez:  Dad coming to America and the big fiestas of Wilmington

Author of Mexican Americans In Wilmington Olivia Cueva Fernandez recollects the big fiestas that brought people to the harbor town from all over the greater Los Angeles area — many of them arriving on the old “Red Cars.”

Former Californian Assemblyman Warren Furutani tells about of his father growing up on Terminal Island before World War II.

Croatian American Club co-founder Vlado Huljev speaks about his daring escape from communist Yugoslavia across the Adriatic Sea to Italy then to America.

Founder of Clean San Pedro describes amazing story of his wife’s grandmother whose husband was in WW II Pacific Fleet stationed in Pearl Harbor when it was bombed December 7, 1941 and he was reported killed. The news was dire, but  all changed when she received an improbable telephone call from San Francisco.

Daughter of founder of Star Fisheries recalls fond memories of growing up in pre World War II “melting pot” San Pedro, including the story of an ambulance crash that her mother was involved in on the way to giving birth to her.

Stephanie Mardesich: Fishermen’s Fiesta and the “smell of money”

Progeny of pioneer of California tuna canning industry LAHIFF director/founder Stephanie Mardesich recalls one of the greatest of San Pedro celebrations,  the Fishermen’s Fiesta, and how the aroma of freshly caught tuna meant economic prosperity for so many local families.

Irene Mendoza: From ship service, to Masons, to working at City Council

Irene Mendoza speaks of her career and how she got started in political service in the most unlikely way, by meeting a 14 year old boy. That boy was future Los Angeles  City Councilman Rudy Svorinich.

President of ILWU Foremen’s Union Local # 94  Danny Miranda talks about throwing bananas when he first started working as a longshoreman.

POLA community advocate explains how she stayed out of trouble growing up in Wilmington and encouraged her nephews and nieces to paint out graffiti on weekends as a means to taking back their community.

Rock and roll tour road manager took an elective class in stage crew at SPHS that lead to an exciting career (with a detour getting busted sneaking backstage at a show).

Former Los Angeles City Councilman for District 15 tells amusing tale of how his dad and uncle claimed to be Native Americans because they were born on an Indian reservation in the state of Washington and part of the “Red Nose” tribe!

Trani’s Ristorante owner shares memories of family origins and legacy of ”The Majestic Café” that was a magnet for some of Los Angeles’s greatest  ports superstars.

Wilmington native recounts how a real estate transaction for a new Mexican restaurant in Wilmington led to a partnership that eventually launched Taco Bell, and how he  went on to also help with the founding of Wienerschnitzel.

A non-juried, non-competitive film festival LAHIFF aims to entertain, enlighten and educate the cinematic audience by showcasing film and video that reflects the harbor and all that it embraces –  shipping and commerce, fishing, sailing, water sports, sea life and the area’s rich ethnic and cultural influences; and to promote the documentary genre via DocSunday,  literacy and a more thoughtful way to view a film through the education outreach program “Read the Book, See the Movie” – to create a cinematic  bridge between the people of the region and the people of the world.” (LAHIFF is a 501c3 non-profit organization).

Being a sponsor of the  LAHIFF demonstrates a sense of community awareness and support of the essential mission. Partnerships between business and individuals in supporting cultural events is fundamental to perpetuate the humanity, creativity, and traits we value as citizens, and its significance can never be underestimated.